DevDay is a one-day long event, organized by ABB.
There were 12 speakers and around 300 participants.

Back to basics: the mess we’ve made of our fundamental data types 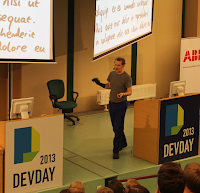 Jon focused on the things we all use everyday, perhaps, not  paying to much attntion to the details. Numbers, strings, dates.
For example, in java,
double d = 0.3d is actually 0.299999999

Also, Jon pointed to interesting facts about dates. For example:

And finally “The Turkey Test“. If you want to test your application internationalization – just try to run it in Turkey.
It was a great key note from a great speaker, who is known for C# in depth and also, as the most popular user at StackOverflow.
Implementing continious delivery
Patrick Kua 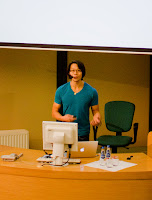 Talk from ThoughtWorks generalising specialist, about what continious delivery really is and how does it help to move the business forward.
So, as Patrick suggests, we should :
Moving the web to the client

Hadi Hariri
Hadi Hariri, JetBrains evangelsit, had a talk about front-end frameworks in genral and specifically about Angular JS.

He also reminded about the power of HTTP protocol, whch is often undertaken by the developers. The suggestion is to use HTTP not only as a transport protocol, but an application protocol, which it really is. 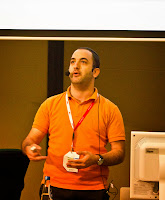 The author of Raven DB in action explained the fundamentals of full text search and how Lucene helps to solve the problem.
He also recommended the ElasticSearch, which is build on top of Lucene and has clustering support out of the box. Apart from ability to scale to many servers, there’s also a REST API, which, looks to be easy to learn and use.
The Architecture of StackOverflow
Marco Cecconi
Software engineer from StackExchange, Marco Cecconi gave an overview of the infrastructure and architecture, which lies behind one of the most popluar web-sites in the world – StackOverflow.

Here are some facts:
It was funny to see Marco on the next day, wearing T-shirt, with the following phrase written on it:
“I don’t usually test my code, but when I do – I do it in production”.
The software journeyman’s guide to being homeless and jobless
Rob Ashton 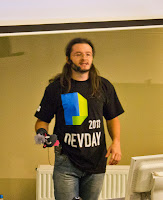 The closing talk from Rob Ashton was all about fun and motivation. An expiring story of a man, who left a boring job and decided to work for free, for companies who needed help.

Each participant recieved a nice package with high-quality T-shirt, pen and notebook.

After the closing talk, the place turned into a party-hall, with beer and shampain.